Christine comes by her love of radio honestly. Middle daughter of Johnny Guarnieri, American jazz and stride pianist. Johnny started with George Hall in 1937. He is possibly best known for his big band stints with Benny Goodman in 1939 and with Artie Shaw in 1940, including Artie Shaw’s Gramercy Five where he played the harpsichord. Johnny played with both Dorsey brothers and can be heard as a sideman with artists such as Charlie Christian, Cozy Cole, and Ben Webster among many others. His Guarnieri Trio included Johnny (piano), Slam Stewart (bass) and Sidney Catlett (drums). Guarnieri is also noted for his embellishment and juxtaposition of jazz with classical piano, such as Scarlatti and Beethoven.

Christine’s first radio appearance was at age five, on the Sunday, NBC, Anthology Program, where she recited ‘I Never Saw a Purple Cow’ by Gelett Burgess (1866-1951).

Christine has been producing shows for WECS since January 2001. Her eight-hour weekly program (Saturday 6 pm-2 am EST) includes interviews, history of radio, and classic radio comedy, mystery, westerns, sci-fi and drama, and period jazz, blues and big band. She created the “Constellation Cowboy” segment, consisting of live interviews with Astronomer, Dr. Russ Sampson, on contemporary and historical celestial events. She expanded this educational format to include segments “Digging with Drzewiecki” with Dr. Peter A. Drzewiecki and “Consequential Chronicles” segment with Dr. Stacey Close. She also covers ‘special topics’ that are relevant to the university as well as the local and global community. Topics have included Technology in the classroom, Domestic Violence issues, the Annual Cancer Special during Relay for Life, to discussing with playwrights Dr.’s Barbara and Carlton Molette a Premiere of “Prudence”.

A 2003 graduate of Eastern with a degree in Multi-media Writing and Production for the Deaf. She spent time on the road as Production Stage Manager for National Theatre of the Deaf.

Christine loves her Veterans, and regularly hosts interviews with one or more organizations to highlight efforts being made to help Veterans. Her commitment to history is to bring awareness of the sacrifices that have been made in our country so that she is free to broadcast every Saturday night. 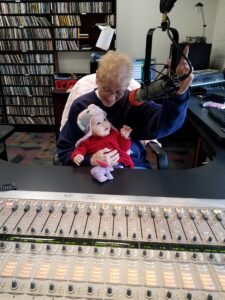